More about me- Menachem Moscovitz

Rabbi Menachem Moscovitz was born in Brooklyn, NY and was raised with a twin brother and younger brother and sister. Today, he lives with his wife and children in Las Vegas.


Rabbi Moscovitz has long been interested in Jewish education and outreach, having attended Yeshiva Tiferes Yisroel in New York and earning his bachelor’s degree in Talmudic studies at the Rabbinical Seminary of America, also in New York. To round out this education and qualify him for teaching, he earned a Master’s Degree in Educational Administration at Trident University in Cypress, California.


Rabbi Moscovitz began his career as a mentor for high school students, camp counselor, and Division Head at Camp Dora Golding in East Stroudsburg, Pennsylvania in the Pocono region.


Rabbi Moscovitz married in 2005, after which he pursued advanced Talmudic studies at the Rabbinical Seminary of America, while teaching classes at Yeshiva Tiferes Yisroel. He also oversaw kashruth integrity as the Kashruth Supervisor at a number of assisted living facilities around New York.


In 2012, after completing his formal education, Rabbi Moscovitz became a 5th grade teacher at  Yeshiva Derech Hatorah in Brooklyn, where he strove to share his passion for the Torah by sharing the Talmud with his students and equipping them to continue their studies beyond his class. He also taught small groups of students Math and English under the school’s Title 1 program.


In 2013, while still teaching, Rabbi Moscovitz joined the Long Island Torah Network as its Managing Director. The Network offers classes, study groups, and other education resources to the Jewish community in Nassau and Suffolk counties. As Managing Director, Rabbi Moscovitz was responsible for public relations, for teaching Torah, and for creating, developing, and implementing a number of new programs.


In 2015, Rabbi Moscovitz moved with his family to Las Vegas, where he was invited to join the education and outreach team at the Kollel. This position would give him an opportunity to make a difference for the community of over 70,000 Jews. While with the Kollel, Rabbi Moscovitz taught both classes, coordinated, events, managed public relations, and worked with individuals to deepen their understanding of Torah.


In 2017, Rabbi Moscovitz was approached by two other rabbis who were interested in establishing a high school for Jewish boys in Las Vegas. With the support of the Kollel and encouragement from the Jewish community, Rabbi Moscovitz played a vital role in the establishment of the Mesivta of Las Vegas in August 2017.


When he isn’t teaching, Rabbi Moscovitz enjoys singing and playing guitar. He often performs at weddings and other events, as well as playing concerts. Though currently based in Las Vegas, he continues to serve as Chazzan/Cantor at Congregation Ahavas Yisroel in Flushing, NY during the High Holidays.


In his free time, Rabbi Moscovitz enjoys spending time in nature with his family and exploring new areas. He has enjoyed working with the Jewish community in Las Vegas and hopes to continue to do so for many years to come.
Posted by Menachem Moscovitz at 11:38 AM

According to research, about 72 % of teachers or education professionals describe themselves as stressed. Menachem Moscovitz blames stres... 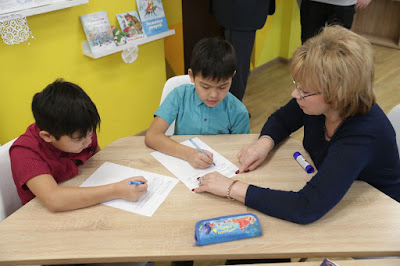